Travel Management Planning is just one step towards complete wilderness. Let me show you how.

It’s hard for your average person to comprehend a scenario where non-governmental organizations buy up rural private property to create wildlife preserves with a goal to turn 50% of the United States into Wilderness. If you’re concerned about road closures, then strap on your tinfoil hat and get ready for this one.

Road closures suck, I think we can all agree on that. When a backroad is closed, it hinders access to some of the most beautiful places in western America. Our elders and children are quickly losing those memorable places that we once enjoyed. Environmentalists suck too. They say the western way of life damages the environment. But the truth is, the everyday environmentalist, and even the professional biologists are as manipulated as a cigar that cures cancer. They say we disturb wildlife, destroy artifacts, cause erosion, and pollute the earth. But yet, if you spend any time in nature, you will see life flourish.

The idea to create more and more wilderness and protected areas is becoming a religion. Many firmly believe the only way to sustain life on earth is to encapsulate ourselves in modern sustainable cities. It’s a collective think-tank consisting of non-governmental organizations from around the world. Together they create policy and set the standards for many environmental issues. The only way to achieve their goal is a complete rearrangement of human society.

The environmentalist wet dream to re-wild America is in full swing and is now on the table. The incredible amount of federal regulation that leads to motorized access closures is just one part of a strategy to turn 50% of America back to wilderness. In this article, I will attempt to show you EXACTLY why our roads are being closed, why mining and logging are heavily regulated, and what the end goal is for American soil. 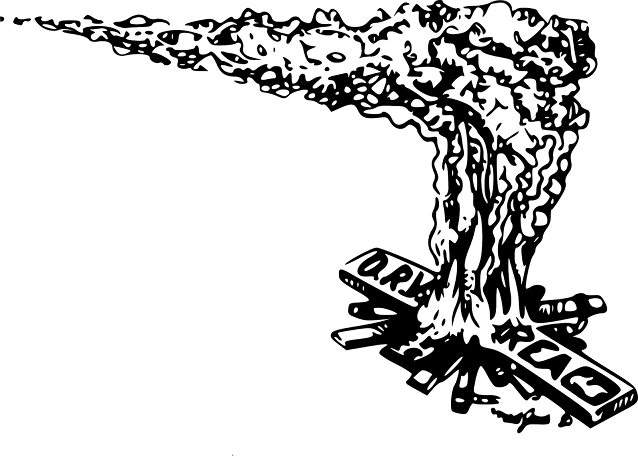 The vision of the environmentalist depicting an Off-Road Vehicle AREA sign on fire.
Published in 1992 in a special issue of Wild Earth: The Wildlands Project – Plotting a North American Wilderness Recovery Strategy.

If you’ve never heard of the Wildlands Project, well, I’m glad you’re here. For years the project has been called a conspiracy theory. Despite the criticism, it is a fact that non-governmental organizations are working on completing a wilderness system that makes today’s environmental policy look like child’s play. It is not a law or regulation. It’s a call to action for all environmentalists of the early 1990s and thereafter. When you take a look at this plan, you start to realize travel management and resource management planning is just one step towards re-wilding America.

Reed Noss is the scientist who developed the idea of creating wilderness corridors to connect different protected areas around the US. His plan was picked up by the Nature Conservancy and eventually a man named Dave Foreman, who is also the founder of Earth First and the Cenozoic Society. Reed Noss published his master plan in a magazine called Wild Earth, a magazine published by the Cenozoic Society. In this special edition of Wild Earth magazine, he describes his master plan to connect National Forests, National Parks, Wildlife Refuges, and wilderness areas with “wildlife corridors” with no human activity. These areas would be surrounded by “buffer zones” with little to no human activity. Under this grand scheme, complete elimination of mining and ranching would be phased in. Full closure of all roads with no more the one mile of roadway per square mile would be rigorously pushed. Burdensome regulations would stop you from moving dirt on your property.

There is no doubt that Dr. Reed Noss has some rather extreme views. As you read the bizarre document, you see a complete correspondence with the current policy that is closing roads across America. It’s the outright admittance of the radical environmentalist ideology. It’s a broad idea to “grope our way back to October of 1492.” Dr. Noss wishes to redefine what a wilderness area is and how wildlife conservation is governed. He lays out a complete plan to close roads and designated those areas as wilderness.

(Page 15) “I suggest that at least half of the land area of the 48 conterminous states should be encompassed in core reserves and inner corridor zones (essential extensions of core reserves) with the next few decades; I also believe that this could be done without great economic hardship. Nonetheless, half of a region in wilderness is a reasonable guess of what it will take to restore viable populations of rare carnivores and natural disturbance regimes, assuming that most of the other 50 percent is managed intelligently as buffer zones.”

(Page 28) “Look also for National Forests, BLM lands, state forests, county lands, military reservations, and the like. All of these public lands must play a major role in a Wilderness Recovery Network.

Finally, look for the gaps between wildlands or public lands. Such private lands often will be important areas for acquisition by public agencies or by private groups like The Nature Conservancy. Even in public land-rich regions like the West, such gaps are significant, but they are especially crucial in the East where there is much less public land and where large private holdings are critical elements for Wilderness Recovery Networks. (Look at the two sidebars accompanying this article. One lists the large roadless area complexes in the West that should serve as Wilderness Cores. The other identities key areas east of the Rocky Mountains, which are priorities for public land acquisition, consolidation, and wilderness recovery, order to serve as Wilderness Cores. These lists are for the United States only.)

Mining is an inappropriate use of public lands in virtually all cases. Vehicle use of established roads must be entirely prohibited. By freeing Forest Service, BLM, and state lands of such multiple-abuses, many roads and other developments could be closed -thereby greatly increasing the amount of land available for Wilderness Recovery.

As we develop plans for Wilderness Recovery Networks, we should keep all of this in mind. Roads necessary only for logging and grazing or recreational access should be closed, logged areas allowed to revegetate, and overgazed watersheds encouraged to heal. It may be necessary to allow some roads to remain open to official use for short time periods to alow active restoration in severely abused areas, or for the reintroduction of extinct species, but the majority of dirt and gravel roads on the public lands should be closed quickly.”

In this video, Dr. Reed Noss talks about his utopian vision to re-wild America. He explains, “the federal government should have legal remedies when it comes to conservation and privately owned land.” Furthermore, he tells the history of the Wildlands Project.

The term sustainable development was coined by a woman named Gro Harlem Brundtland. She served three terms as Norwegian Prime Minister between 1989 and 1996. An active member of the Labor Party, she entered government in 1974 as Minister of The Environment in Norway. She later became president of Socialist International. After her resignation as Prime Minister, she became an international leader in sustainable development. Likewise, she served as director of the World Health Organization and currently serves as Deputy Chair of The Elders.

The Clinton administration signed several UN treaties, including The Convention On Biological Diversity. The agreement calls for all member states to produce a Global Biodiversity Assessment. In 1992, the first Global Biodiversity Assessment was published under a grant from the Global Environment Facility in coordination with the World Resources Institute and the World Wildlife Fund. It has since been adopted by the International Union For The Conservation Of Nature as a guide for lawmakers to implement the treaty at the local level. In the Global Biological Assessment, it explains the Wildlands Project will be the central theme for wildlife species protection in America.

In this video, Gro Harlem Brundtland talks about her socialist wet dream for our common future. She explains the 17 sustainable development goals that have been set forth as a result of several UN treaties. She also describes how she destroyed the fossil fuel industry as Prime Minister of Norway.

The plan to re-wild Arizona

Secretarial Order 3362 (PDF) from the Department of Interior directed the Bureau of Land Management, Forest Service, and National Park Service to work with local agencies and non-governmental organizations to create action plans. It aims at creating wildlife corridors across multiple western states, utilizing roadless areas on state, federal, and even private land. Secretary Zinke proudly prizes his achievement as a win for the hunting community.

“My goal is healthy herds for American hunters and wildlife watchers, and this order will help establish better migration corridors for some of North America’s most iconic big game species like elk, mule deer and antelope,” said Secretary Zinke in a Department of Interior press release.

On the contrary, In the Wildlands Project, Dr. Reed Noss writes,

“In recent years, new roads, both within and surrounding publicly-owned land, particularly National Forests, have increased access into bear habitat or along its perimeter. Accompanying this access also is an increased use of modern technology by bear hunters; the availability of CB radios, 4-wheel drive vehicles, ATVs, and radio-collared hunting dogs has lead to increasing efficiency in harvesting bears. Growing numbers of other kinds of hunters also put pressure on the resource. In addition, there are added economic incentives to kill bears for their hides, claws, teeth, cubs, and more recently, gall bladders.” 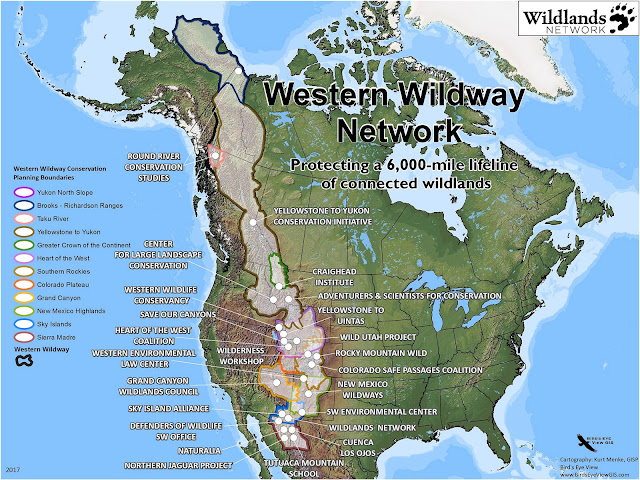 The Western Wildway map showing non-governmental organizations spearheading the Wildlands ProjectIn October of 2019, The Arizona Game And Fish publishedtheir action plan (PDF) titled, “Improving Habitat. Quality in Western Big Game Winter Range and Migration Corridors.” In this plan of action, AZGF, along with non-governmental organizations, and Federal agencies identified several wildlife corridors across Arizona. Multiple numbers of big game species were collared and tracked from their winter to summer range. As a result, this study does show how major highways impact the migration of wildlife.

I think many of us could agree that we should do something to help wildlife move freely across highways. However, the Arizona Game and Fish suggests agriculture, grazing, private property, and mining are causing fragmentation of wildlife corridors. They even mention the Four Forest Restoration Initiative to tailor their needs for future wildlife corridors. The Arizona Game And Fish project is a direct correlation with the Wildlands Project. In fact, the Wildlands Network praises Secretary Zinkie for his decision.

It’s important to note, Arizona Game And Fish also play an essential role as a “cooperating agency” during travel management planning. They are responsible for representing the state of Arizona while making decisions with road closures. There is no doubt that the Arizona Game And Fish is working on completing Dr. Reed Noss’s vision of re-wilding America.

There is no more denying the plan to transform America under the ideals of the United Nations.This is just one part of the socialist Agenda 21 plan for sustainability.

Rep. Tom Udall has introduced legislation to designate wildlife corridors across America. Under this legislation, federal land managers would be mandated to create wildlife corridors, and the vision of the Wildlands Project would become law. The legislation calls to establish a Wildlife Corridors Stewardship Fund to provide the Nature Conservancy with a multimillion-dollar budget. The Wildlands Network wrote the bill and is proudly supporting it. The same legislation has been introduced over the past two years. It’s set to be re-introduced any day now.

CALL YOUR ELECTED OFFICIALS AND DEMAND THEY SAY NO TO THE WILDLIFE CORRIDORS CONSERVATION ACT.